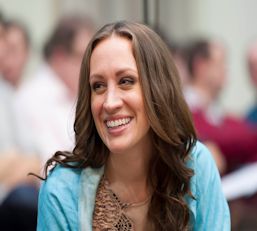 American soprano Brenda Rae is already establishing herself as an exceptional artist in the world of opera. She has performed major roles with numerous internationally recognized companies including Oper Frankfurt, of which she has been a member since 2008/9, the Wiener Staatsoper, the Bayerische Staatsoper, Opéra National de Paris, Glyndebourne Festival, L’Opéra National de Bordeaux, the Hamburgische Staatsoper, Santa Fe Opera, and Carnegie Hall. Brenda has an artistic diploma from the Juilliard Opera Center, a Master of Music degree from the Juilliard School, and a Bachelor of Music Degree from the University of Wisconsin-Madison. She was awarded first prize by the Licia Albanese Puccini Foundation in 2007. In Frankfurt, Brenda performed the title role in Maria Stuarda in concert and shortly thereafter, Cleopatra in a new production of Giulio Cesare, both to enormous success. Outside of Frankfurt, Brenda made house debuts with the Opéra National de Paris (Anne Trulove in the The Rake’s Progress) and the Hamburgische Staatsoper (Zerbinetta in Ariadne auf Naxos). She also sang Polissena in Radamisto with The English Concert (conducted by Harry Bicket) in a concert tour that included London, Birmingham, Paris, Ann Arbor, and Carnegie Hall. Fantasio is Brenda’s first recording with Opera Rara.