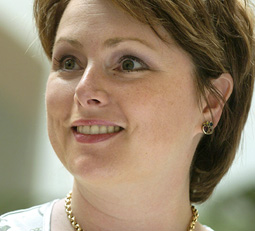 Born in South Wales, Rebecca Evans studied at the Guildhall School in London. She has sung often at the Royal Opera House, Covent Garden, her roles including Pamina (Die Zauberflöte), Zerlina (Don Giovanni), Despina (Così fan tutte) and Nannetta (Falstaff). She has taken the title role of The Cunning Little Vixen for Scottish Opera and Romilda in Xerxes, and she makes regular appearances at Welsh National Opera. Her work in Europe has included engagements at the Bayerische Staatsoper in Munich, Deutsche Staatsoper in Berlin, the Netherlands Opera and Opera de Lausanne. In the US, she has taken the stage at the New York Met, Santa Fe Opera and San Francisco Opera. In concert she has appeared at the Salzburg, Edinburgh, Tanglewood and Ravinia festivals, and she is a regular guest at the BBC Proms. A Grammy Award-winning artist, she has recorded prolifically and is heard on Opera Rara’s disc of highlights from Paer’s Sofonisba.