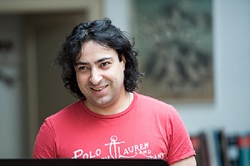 Rodion Pogossov was born in Russia and established himself after joining the Lindemann Young Artist Programme at the Metropolitan Opera.