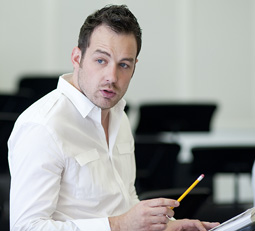 With his debut on Opening Night of the Metropolitan Opera’s 2007-8 season, Stephen Costello announced the arrival of a major new tenor. His performance as Arturo in the new production of Lucia di Lammermoor directed by James Levine led to an invitation to sing the role of Edgardo that season. Mr. Costello was 2009 winner of the prestigious Richard Tucker Award. He was awarded a 2007 Career Grant from the Richard Tucker Music Foundation, as well as a 2006 Sara Tucker Study Grant. He won First Prize in the 2006 George London Foundation Singers Competition, First Prize and Audience Prize in the Giargiari Competition and First Prize in the Licia Albanese Puccini Foundation Competition. In the 2009-10 season he made his debut at Royal Opera House, Covent Garden as Carlo in Linda di Chamounix, recorded by Opera Rara (ORC43), followed by Rinuccio in Gianni Schicchi, Rodolfo in La Boheme at Deutsche Oper Berlin and Romeo at the Salzburg Festival.