Few figures in European history fire the imagination more than Don Sebastian of Portugal. Romantic literature spun extravagant tales around him, and in 1843 he became the subject of Donizetti’s last-composed opera, a sombre five-act masterpiece given at the Paris Opéra. The sheer logistics of staging such a work have militated against its wide performance, but we are convinced that this new recording will trigger a new recognition of its value. Sung in French, the set includes at 220-page booklet with detailed article on the opera by Jeremy Commons and English libretto translation.

‘One of the most important Donizetti releases of recent years’ – George Hall, Opera Now

While sailors at the port of Lisbon make final preparations for the embarkation of Dom Sébastien and his forces on their way to North Africa, we learn that not everyone in the kingdom supports the expedition. Dom Antonio, Sébastien’s uncle who is to rule as regent in his absence, rejoices at the prospect of being rid of his nephew and seizing his power, which he intends to share with Dom Juam de Sylva, the Grand Inquisitor. Don Juam, however, has his own agenda: in return for a guarantee of continuing favour, he has every intention of selling Portugal to Philip II of Spain.

Dom Antonio is pestered by a down-at-heel old soldier who wishes to speak to the King. He tries to turn him away, but Sébastien, who appears at this moment, is indignant that one of his followers should be denied access to him. The soldier, who reveals himself as the poet Camoëns, asks to be allowed to accompany the expedition to Africa. Sébastien acquiesces, but Camoëns then craves another boon. He draws the King’s attention to a procession of Inquisitors who are leading one of their victims, a young woman, to execution. This is Zayda, a Moroccan who, captured and converted to Christianity, has been overcome by homesickness and apprehended as she tried to escape and return to her homeland. Sébastien takes pity on her, but earns the resentment of the clerics when he commutes her sentence to perpetual exile – in Morocco in the house of her father.

Turning his attention to the imminent embarkation, he asks Camoëns to extemporise a poem of departure. Camoëns prophetically foresees that the army will have to face vastly superior forces, but urges the Portuguese to press forward undaunted. At this moment the sky grows dark with threatening storm, and Camoëns, in sympathetic response, finds himself foretelling the rout of the Portuguese army: his cry to the soldiers is now to rescue their King. Sébastien, alarmed at the direction the song is taking, intervenes, and Camoëns, as the sky returns to serenity, bids all incline their flags before the sun which will surely shine upon their deeds. All pray for the success of the expedition – all except Don Juam, whose words are ambiguous (‘May Providence deign to grant my wishes’), Dom Antonio, who secretly hopes the expedition may never return, and the Inquisitors, who call down anathema upon a king who braves their authority. Sébastien and his followers embark.

Scene 1. In the home of her father, Ben-Selim, the Governor of Fez, Zayda is fêted by her female companions, who look forward to her expected marriage to the Arab chief Abayaldos. She herself, however, remains pensive and sad, for she has lost her heart to Sébastien.

Ben-Selim has organised dances to divert her, but Abayaldos bursts in, angry that they should waste their time on frivolity when Morocco is invaded by foreigners. All the men respond to his call to arms, and seize their swords. Abayaldos urges Zayda to promise him her heart as his prize for his prowess in the forthcoming battle, but she – understandably in view of her feelings for Sébastien – is unable to respond as he wishes.

Scene 2. The plain of Alcazar-Kebir, following the defeat of the Portuguese. Dom Sébastien is surrounded by a number of his officers. All are wounded. A hoard of Arabs erupts on to the stage, seeking the king, and one of the officers, the dying Dom Henrique de Sandoval, saves Sebastien’s life by claiming that he himself is the man they seek. The Portuguese – all but Sébastien, who has fainted from loss of blood – are led away captive.

Zayda enters furtively. Finding Sébastien still alive, she revives him and binds up his wounds, declaring that she loves him and will devote herself to him for the rest of her life. He, for his part, recognises her as an angel sent to him by Heaven.

At this point Abayaldos and the Arabs return, still intent upon blood. Zayda, without revealing Sébastien’s identity, pleads for his life. She tells how, when her own life was saved in Lisbon, she vowed that she would reciprocate by seeking and seizing the opportunity of saving a Portuguese. Abayaldos bargains with her, agreeing to grant her plea if – but only if – she consents to marry him. Having no alternative, she succumbs to his demand and allows herself to be led away.

Sébastien, left alone, laments his fate. He recognises Zayda’s devotion as his only consolation.

Scene 1. In the royal palace of Lisbon, Dom Antonio, now effectively king, receives the Moroccan ambassador, who is none other than Abayaldos. As yet no one realises that the wife whom Abayaldos has obliged to come with him is Zayda.

When husband and wife find themselves alone, we discover the hollowness of their marriage. Abayaldos believes himself unloved and betrayed in thought if not in deed. The only reason he has brought Zayda to Lisbon is that he is too jealous to let her out of his sight. She, for her part, declares that he is welcome to kill her, but she reserves her right to hate him.

The great square before the Cathedral of Lisbon, by night. A wounded Camoëns appears, mortified to think that he returns to his homeland penniless, and obliged to resort to begging in order to survive. A detachment of soldiers passes, going their rounds, and one of them, hearing that he comes from Africa, warns him not to publicise the fact: the new king, Antonio, has no sympathy for his predecessor’s adherents.

By coincidence the first person of whom Camoëns asks alms turns out to be Dom Sébastien, returned to Lisbon in not much better shape. They greet each other warmly, but are interrupted by the mournful sounds of an approaching funeral procession. To his amazement, Sébastien realises that it is for himself: an ostentatious mock funeral mounted by his uncle, Dom Antonio. This is too much for Camoëns, who protests that anyone should so outrage the true king. Dom Juam de Sylva tries to quell the disturbance and have Camoëns arrested, but Sébastien steps forward to his defence. All are astonished to recognise him, but Abayaldos, who happens to be among the onlookers and who realises that this is the same man whose life he spared, declares that he buried the true king at Alcazar-Kebir. Dom Juam de Sylva, recovering from his shock, denounces Sébastien as an impostor. Threatening him with all the wrath of the Inquisition, he has him arrested, and as the procession resumes its course, Sébastien is dragged away. An exhausted Camoëns falls unconscious in the arms of bystanders.

Dom Juam announces that a witness waits to be heard, and Zayda appears. She declares that the man who died at Alcazar-Kebir was Dom Henrique, and that Sébastien was in fact saved by a woman – herself. Recognising her, Dom Juam denounces her as the apostate who, as a result of Sébastien’s intervention, had escaped from the Inquisition when on her way to the pyre. Any remote chance she may have had of influencing the trial in Sébastien’s favour rapidly evaporates, and is utterly destroyed when Abayaldos, who has been lurking in the background, steps forward and brands her as an adulteress. She interprets this as a sign that she is now released from any remnant of obligation to him, and proudly and defiantly acknowledges her love for Sébastien. Dom Juam has her arrested, determined that both she and Sébastien shall die, and they are haled away in different directions.

In a tower adjoining the prisons of the Inquisition, Dom Juam de Sylva, in conversation with Dom Luis, the Spanish envoy, concludes his traitorous pact to sell Portugal into the hands of Philip II. He then has Zayda brought in, and informs her that he is willing to spare Sébastien if she can persuade him to sign a document he has prepared. Zayda is only too willing to snatch at any chance of saving Sébastien’s life, and undertakes to gain his signature. Dom Juam gives her an hour in which to do so: if she does not succeed, she will die.

Left alone, Zayda finds that the prospect of death no longer daunts her. On the other hand, if she could be the means of saving Sébastien’s life, that would be happiness indeed. Sébastien soon joins her. They greet each other warmly, and eagerly open the document. But it turns out to be a pact that, provided he renounces his crown and his rights, he should be handed over to Spain. He declares that he could never sign anything so ignominious and shameful. Zayda agrees, and as a clock is heard striking the hour, she prepares to die.

The Inquisitors enter. Sébastien, comprehending the situation, immediately changes his mind and determines to sign. It is now Zayda’s turn to protest: if he does so, she will throw herself into the sea and drown. He nevertheless goes ahead and hands the document, duly endorsed, to the Inquisitors.

As the Inquisitors retire, Zayda goes to carry out her threat. But from below there come the sounds of a barcarolle, and a moment later Camoëns appears. He has a barque waiting for them at the foot of the tower, and carries with him a rope ladder to enable them to descend.

The set changes to show the exterior of the tower with the sea below. Zayda and Camoëns have already descended in safety to a bastion halfway down, and there Sébastien joins them. At the same time Dom Antonio and Abayaldos appear beneath the tower, Abayaldos alarmed that the prisoners should be escaping, but Antonio coldly declaring that this is all part of a deliberate plan. As Zayda and Sébastien resume their descent, soldiers appear at the top of the tower and slash away the rope ladder, so precipitating the lovers to their deaths in the sea. The soldiers now fire upon Camoëns, who, wounded, falls after them. A gloating Antonio declares himself king, but Dom Juam de Sylva, appearing at this moment, disillusions him, showing the paper, signed by Sébastien, which cedes the kingdom to Spain. Camoëns, dying, is carried in by a group of sailors, and continues to call upon Sébastien even while Dom Juam proclaims Philip II king. In the distance the Spanish fleet is seen approaching. 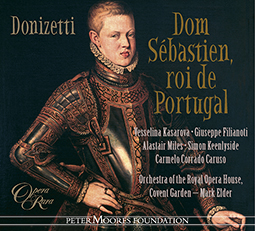