Verdi’s commission from the Paris Opera was for a five-act grand opera in the style of Meyerbeer or Halévy. Grand indeed, for the scale of Verdi’s conception was monumental.

Verdi’s commission from the Paris Opera was for a five-act grand opera in the style of Meyerbeer or Halévy. Grand indeed, for the scale of Verdi’s conception was monumental. However, in his enthusiasm, Verdi composed an opera that was, even for French taste, too long. As rehearsals progressed, it became necessary to make cuts, some of them substantial. It’s not hard to imagine Verdi’s dismay at this point and after the first performance he left Paris, never having heard his opera as originally composed.The eliminated music remained unheard and was forgotten until David Rosen and Andrew Porter began reassembling the opera according to Verdi’s original plan. Conceived by the BBC’s Chief Producer for radio, Julian Budden and with a Francophone cast, the 1973 BBC “restored” Don Carlos was a revelation.The restored passages were, of course, a great discovery but the real excitement came with the first ever opportunity to fully comprehend Verdi’s original intentions for this magnificent opera. This 4 CD set comes with a 300 page illustrated booklet which, as well as containing the libretto and synopsis in Italian, German, French and English, also has an introductory note by Andrew Porter.

‘This set is utterly necessary in any collection’ – Robert Levine, ClassicToday.com

In 1556, the Emperor Charles V abdicated, celebrated his own funeral, and retired to the monastery of San Jeronimo at Yuste. His song Philip II is now on the throne of Spain. France and Spain are at war, but Phiip’s son, Don Carlos, has long been betrothed to Elizabeth of Valois, the daughter of Henry II; and Spanish envoys have come to Frances to confirm the betrothal and sign a peace treaty between the two countries.

ACT I
The forest of Fontainebleau
Woodmen listen to the offstage calls of the royal hunt. Elizabeth, passing across the scene, distributes alms. Carlos, who has come to Frances incognito to see his bridge, has been watching. He steps forward and sings of her beauty (“Je l’ai vue”). Elzabeth and her page Tybalt return, having lost their way; Tybalt goes to summon an escort. Carlos shows Elizabeth a portrait of her betrothed; she recognizes him, and the two sing of their love (“De quells transports”). But the idyll is brief: Tybalt returns, greeting Elizabeth as Queen and announcing that Henry II has now promised his daughter to Carlos’s father, King Philip. The suffering people urge her to accept him, for the sake of peace, and after a poignant hesitation she does so. Carlos is left to his despair.

ACT II
Scene 1: The cloister of the Yuste monastery
A Monk prays before the gates of the tomb of Charles V. Carlos has come here to forget his unhappiness, but the Monk declares that the cares of this world continue even in the cloister. Carlos starts at the sound of the voice – is this his grandfather, the Emperor Charles V? Carlos’s friend Rodrigo, the Marquis of Posa, joins him, embarks on an account of the suffering in Flanders, but breaks off when he sees the trouble in Carlos’s eyes. Carlos confesses his secret: his is consumed by love for his father’s wife. Posa advises him to conquer his sorrow by a noble enterprise – that of freeing Flanders. The two vow to live and die together (“Dieu, tu semas dans nos ames”), and after Philip and Elizabeth have crossed the cloister and prayer before the gates of Charles V’s tomb, they renew the vow.

Scene 2: Outside the Yuste monastery gates
Outside the monastery, which no woman but the Queen may enter, her ladies while away the time with the Veil song that Princess Eboli sings them (“Au palais des fees”): it tells how King Achmet, who once ruled in Granada, grew bored with his queen and wooed a veiled lady in the palace gardens: only to discover, when at his entreaty she threw back her veil, that he was courting his own wife.

The Queen enters, followed by Posa, who brings Elizabeth a letter from her mother and, under cover of the letter, a note from Carlos. While Eboli and Posa chat about the latest Paris fashions, Elizabeth reads the note, which tells her to trust Posa. In two broad strophes (“L’Infant Carlos, notre esperance”), Posa urges Elizabeth grant Carlos an interview, while Eboli (in asides) reveals her love for Carlos, and her hope that he loves her. Dismissing her ladies, Elizabeth consents to Posa’s request. Carlos, at first controlled, asks Elizabeth to obtain the King’s permission that he should leave for Flanders, but then his emotions overcome him and he falls to the ground in a swoon. On recovering, he clasps Elizabeth in his arms, defying the world. But she exclaims, “Then smite your father. Come stained with his murder, to lead your mother to the alter.” Carlos runs off in despair.

Philip enters, angry to find the Queen unattended. Coldly he orders the lady-in-waiting who should have been with her to return to France. Elizabeth consoles her (“O ma chere compagne”). The company leaves, but Philip orders Posa to remain: has he no favour to ask for? “Nothing for me,” replies the Marquis, “but for others”; and, invited to speak freely, he describes the terror and destruction being wrought in Flanders. “At this bloody price,” says Philip. “I have paid fro the peace of the world.” “The peace of a graveyard,” Posa replies: one word from Philip could change the world and set people free. The King, struck by the young man’s fearless honesty, confides to him his suspicions about his wife and his son, and appoints him his personal counsellor, but bids him beware the Grand Inquisitor.

ACT III
Scene 1: The Queen’s gardens
Carlos enters, reading a note of midnight assignation which he believes has come from Elizabeth. When Eboli (who wrote the note) enters, masked, Carlos mistakes her for Elizabeth, and pours out his love. Too late, the mistake is revealed, and Eboli guesses his secret. Posa enters and tries to silence her, but in a tense trio she bids them beware the fury of a woman scorned. Posa asks Carlos to entrust to him any incriminating papers he may be carrying, and after a moment’s hesitation – can he trust the King’s new favourite? – Carlos does so.

Scene 2: A large square before Valladolid Cathedral
The people gather to acclaim their King. Monks escort some Inquisition victims across the square; a splendid auto-da-fe, or public burning of heretics, is among the attractions of the day. Philip appears from the church and swears solemnly to serve God with fire and the sword. Suddenly a group of men in black cast themselves at his feet, and Carlos, who has led them there, announces that they are deputies from Flanders. The Flemings break into an eloquent plea for their country (“Sire, la derniere heure a t-elle donc sonne?”). Philip orders them to be taken away. All – except the monks – urge him to show mercy. At the close of the huge ensemble, Carlos asks his father to send him to Flanders as regent, and when Philip refuses, draws his sword on the King. No on dares to disarm him, until Posa steps forward. The King makes Posa a Duke. The pyres have been lit, the festive chorus is resumed, and a voice – unheard, Verdi said, by anyone on stage – descends from on high promising divine peace to the tortured heretics.

ACT IV
Scene 1: The King’s study
After the public confrontation, a scene of private crises: Philip reflects gloomily on his loveless, careworn life (“Elle ne m’aime pas!”). The Grand Inquisitor is announced. Philip Asks whether he will be forgiven if he condemns his son to death: the Inquisitor replies that God did not hesitate to sacrifice His, and then demands that Posa should be handed over to the Inquisition. Philip refuses. The Inquisitor declares that Philip himself is in danger of being summoned before the Inquisition. The King asks fro forgiveness, and the Inquisitor replies equivocally. He leaves: Philip remanks bitterly that the King must bow before the Priest.

Elizabeth rushes in, distressed that her jewel casket has been stolen. Philip, who has it, opens it and draws out a portrait of Carlos. Elizabeth Reminds him that she was once betrothed to the Prince, but he calls her an adulterous wife. She swoons. Philip calls Eboli and Posa to her assistance, and in a quartet Philip curses his unworthy suspicions, Eboli expresses her regret (for it was she who stole the casket), Posa decides that the time has come for him to take action, and Elizabeth, reviving, laments her unhappy life in this friendless country.

The two women are left alone. Eboli confesses that, drive by jealousy, she denounced Elizabeth to the King (“J’aimais l’Infant… L’Infant m’a repoussee!”). At Eboli’s further confession, that she has been Philip’s mistress, Elizabeth tells her to choose, the following day, between exile and the veil, and leaves. Eboli curses the gift of fatal beauty that has caused her ruin (“O don fatal”). Her thoughts turn to Carlos, and she resolves to save him during the one day this is left to her.

Scene 2: Don Carlos’s prison
Posa comes to bid Carlos farewell (“C’est mon jour supreme”); he is marked for death, since Carlos’s incriminating papers have been found on him – but Carlos can go free, to save Flanders. A shot is fired, but Posa falls. Quickly he explains that Elizabeth awaits Carlos at the Yuste cloister; he dies content, since by his death he saves Carlos “(Ah! Je meurs l’ame joyeuse”). Philip enters, to return to Carlos his sword, which Carlos indignantly refuses. A warning bell rings out; a crowd, roused by Eboli storms the prison. Demanding the Prince. The tumult is quelled by the Grand Inquisitor, who orders the sacrilegious mob to fall on its knees before the King.

The Cloister at Yuste
Elizabeth invokes the spirit of the Emperor Charles: may he carry her prayers to the Eternal Thorne (“Toi qui sus le neant des grandeurs de ce monde”). She recalls her first meeting with Carlos. When he enters, they speak tenderly of Posa. Carlos declares that he is done with dreaming (“J’avais fait un beau reve”); now he will save Flanders. Elizabeth acclaims his resolve (“Oui, voila l’heroisme”). The two take a solemn farwell, hoping to meet in a better world (“Au revoir dans un monde ou la vie est meilleure”): “And for ever! Farewell!” Philip, the Inquisitor, and officials of the Inquisition have overheard them; the King comes forward and echoes their final words, seizes his wife, and delivers his song to the Inquisition. Carlos, defending himself, retreats towards Charles V’s tomb. The gates of the tomb open, and the Monk – now unequivocally wearing Charles V’s crown and imperial mantle – steps forth. He enfolds Carlos in his mantle and leads him into the cloister: “The peace that your heart hopes for is found only in God’s presence.” 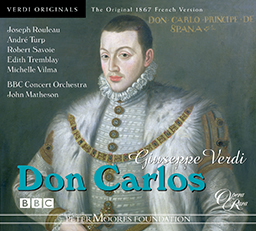