Ermione is without doubt one of the greatest operas by Rossini, despite it being perhaps the least immediately successful: Ermione was received with incomprehension at its sole performance in 1819 and was never revived in Rossini’s lifetime.

During the years from 1815 to 1822 when his career centred on Naples, Rossini composed a sequence of works for the Teatro San Carlo, which at that time boasted an outstanding orchestra and a company of resident singers that was the leading ensemble available anywhere. A string of masterpieces resulted, including such works as Elisabetta, regina d’Inghilterra, Otello, Ricciardo e Zoraide and La donna del lago (all featuring in Opera Rara’s catalogue). Ermione is without doubt one of the greatest operas by Rossini, despite it being perhaps the least immediately successful: Ermione was received with incomprehension at its sole performance in 1819 and was never revived in Rossini’s lifetime. The composer was resigned: ‘It is my little Guillaume Tell in Italian,’ he said, ‘and will not see the light of day until after my death.’ Since its first stage revival in Pesaro in 1987, Ermione has been recognised as a lost masterpiece. Set in the aftermath of the Trojan War, the opera’s novelties begin with an overture interrupted by a choral lament of Trojan prisoners. Tension and staggering originality are maintained right to the very end.

Gramophone Award winner 2011 – ‘This recording “runs at white heat whenever Colin Lee’s Orestes is on stage” – Carmen Giannattasio in the title-role is “the mistress of every phrase”. The mastery of bel canto specialist David Parry adds the finishing touches to an exemplary recording on this specialist label for unusual operatic repertoire.’

Following the fall of Troy, the surviving members of the Trojan royal family have become the slaves of one or another of their Greek conquerors. Andromaca (Andromache), the widow of Hector, has, together with her young son Astianatte (Astyanax), fallen to the lot of Pirro (Pyrrhus), the son of Achilles, who has taken them home with him to his kingdom of Epirus. He has, however, fallen in love with Andromache, and has thus incurred the jealousy and wrath of Ermione (Hermione), the daughter Menelaus and Helen, whom he had previously engaged himself to marry. The sympathies of the Greek commanders lie with Hermione, though for political reasons. The fact that Astianatte is the sole male survivor of the Trojan royal line excites their fear that he could one day take up again the Trojan cause and so threaten the safety of Greece.

A subterranean dungeon in Buthrotum, the capital of Epirus, where, as night draws to a close, Trojan prisoners lament their fate. The little Astianatte is asleep, watched over by guards. Andromaca is led in by Fenicio, Pirro’s counsellor and former tutor. Attalo, a confidant of Pirro, and Cefisa, Andromaca’s confidante, follow closely.

Andromaca awakens Astianatte and embraces him, while the others try to comfort her. Attalo insinuates that she should yield to Pirro’s love, and so obtain her son’s release, but Andromaca is not to be deflected from her grief, especially when Fenicio accuses Attalo of acting with ulterior motives: all he really wishes to do, he suggests, is stir up war between Pirro and the Greek commanders.

Andromaca has been granted only an hour in which to see her son, and Fenicio, despite himself, is obliged to lead her away.

An open air part of the palace, with gardens adjoining. Day is dawning as Cleone, Ermione’s attendant and confidante, enters at the head of a group of Spartan maidens to invite her mistress to go hunting. Grateful though Ermione is, she declines, for she can think of nothing but her jealousy of Andromaca and her wish for revenge.

Pirro enters, impatient for the return of Andromaca from the prison. At first he does not see Ermione, and, when he does, he tries to avoid her. He soon finds himself assailed with reproaches and sarcasms, all of which he proudly and scornfully rejects.

A group of noblemen brings word that Oreste, the son of Agamemnon, has just arrived upon the shore, come as the ambassador of the Greek commanders. His name fills Pirro with foreboding – but Ermione with joy, since Oreste is her former lover, whom she rejected in favour of Pirro. She sees him now as a possible tool to secure her revenge.

Pirro prepares to receive Oreste in the great hall of the palace. As he leaves, he orders that Ermione and Andromaca should both be present.

Ermione is dismayed, seeing the order that Andromaca should be present as evidence that her rival will soon supplant her and be raised to the throne. Cleone encourages her feeling that she should foster Oreste’s still passionate feelings, and so manipulate him to her advantage.

The hall of audience. Oreste enters, accompanied by Pilade. The sight of the palace that now houses Ermione fills him with distress, for he is still totally smitten with her, but believes that she is deaf to his tears and exults in his suffering. Pilade urges him to set his personal emotions aside and to concentrate on his ambassadorial mission.

Pirro advances, accompanied by Ermione and the courtiers. Andromaca is the last to enter, her very presence exciting Ermione’s ire. Pirro, however, insists that her former state demands respect, and has her seated in a place of dignity.

Orestes declares his mission. It had earlier been announced that Astianatte had been put to death, but the Greek commanders are only too well aware that the victim was a mere scapegoat, killed in the true Astianatte’s place. Given the potential threat that Astianatte’s continued existence poses to Greece, the commanders now demand that he be executed forthwith. Pirro reserves the right to dispose of him as he sees fit, even voicing the possibility that he may one day share his throne with him. Orestes interprets this as a declaration of open rebellion, and Pirro, provoked beyond measure, bids Ermione betake herself back to Sparta and publicly offers his hand and heart to Andromaca. He leaves with his followers, and the audience breaks up.

Andromaca asks Fenicio to conduct her to Pirro, for she wishes to inform him, beyond all possibility of misunderstanding, that she will never be his wife.

The open air part of the palace, as in Scene 2. Ermione tries to convince Cleone that she now detests Pirro as much as she once loved him. Cleone, retiring as she sees Oreste approaching, urges her to twist him to her purpose.

Instead of having to suffer reproaches, Ermione finds herself addressed with fervent words of love. Though Oreste thus plays straight into her hands, she at least has the honesty to say that, since Pirro has reft her heart from her breast, she would dearly like to promote Oreste’s peace of mind, but has no love left to give him.

They are interrupted by Pirro and his followers. Pirro comes with the unexpected announcement that, thinking better of his earlier rejection of Oreste’s demands, he has realised that he was swayed by compassion for Astianatte and is now ready to hand him over. He declares that he wishes peace with the rest of Greece, and offers his hand to Ermione as a pledge of his word. All are taken aback, and Andromaca is filled with dismay at the thought of Astianatte’s threatened fate, especially as she realises that Pirro’s intransigence results from her own refusal to yield to his wishes.

Pirro orders Astianatte to be brought before him, and is in the very act of handing him over when Andromaca appeals to him for further time to reflect. Pirro orders the guards to hold their hands, and once again the expectations of all are reversed. Ermione sees her advantage evaporate, and rebukes Pirro, only to hear herself branded as a tigress and a fury, while Andromaca secretly determines to lay down her own life rather than sacrifice that of her son. The act ends in universal dismay, antagonism and bewilderment.

SCENE 1. An atrium of the palace, with the sea visible in the distance through a colonnade. Attalo brings Pirro news that Andromaca has at last yielded, and Cleone, who has been eavesdropping, steals away to inform Ermione.

Andromaca herself, a moment later, confirms that she has decided to succumb to Pirro’s wishes, and he, overjoyed, sends Attalo to the temple to prepare for the celebration, and then on to the prison to set Astianatte free. In a series of asides Andromaca makes it clear that, once she has secured Astianatte’s safety, she has every intention of taking poison. Pirro may lead her to the altar, but he will find himself wedding a corpse.

She now, however, a moment after Pirro has left her, finds herself confronted by Ermione and Fenicio. Ermione is beside herself with anger, convinced that Andromaca has been laying out all her arts to secure this outcome. Rather than suffer such unjust accusations and insults, Andromaca takes her leave.

A despairing Ermione beseeches Fenicio to seek Pirro out and plead her cause, and he departs to do so. Cleone now tries to fan her mistress’s feelings of resentment against Pirro, but finds her utterly distraught and beyond all persuasion. ‘Loved,’ as Ermione puts it, ‘I loved him; I adore him, now that I am despised.’

Sounds of a festive march are heard, and Pirro’s wedding procession crosses the back of the stage: he himself is seen holding Andromaca by the hand. Ermione feels utterly demoralised, but when her maidens appear, accompanied by Oreste, and ask how they can avenge her, she presents Oreste with a dagger and bids him bury it in Pirro’s heart. Confused and appalled, Oreste leaves, and Ermione, though she is still sufficiently rational to recognise the irony of her hoping to derive a cure from a crime, departs in mounting frenzy.

Fenicio, encountering Pilade, informs him of the failure of his mission: an infatuated Pirro refused to listen to him and ordered him from his presence. Pilade is appalled, for he is certain that a marriage between Pirro and Andromaca will provoke Agamemnon and the Greeks into besieging Epirus.

Ermione returns, increasingly distraught, a prey to conflicting and contradictory emotions and by now quite incapable of rational or logical thought. The final straw to drive her to the brink of insanity comes when Oreste returns to present her with a bloody dagger, the proof that Pirro is dead – though he confesses that he did not strike the blow himself but entrusted the weapon to another hand. His reward is to find himself reviled and execrated as she reveals all her hatred for him and invokes the Furies to destroy him.

Pilade and his followers come to rescue him from the revenge of the people, and, in a state of moral and physical collapse, he allows himself to be dragged to his waiting ship.

Ermione, seeing him escape her wrath, collapses in a deathly swoon.

This recording runs at white heat whenever Colin Lee's Orestes is on stage. [...] Carmen Giannattasio in the title-role is the mistress of every phrase. [...] The mastery of bel canto specialist David Parry adds the finishing touches to an exemplary recording on this specialist label for unusual operatic repertoire. 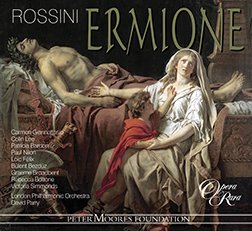