I Normanni a Parigi

This is the seventh opera in the Essential Opera Rara series and, once again, a vivid impression of the work is captured on a single disc.

With Rossini in retirement, Mercadante was then in competition with Bellini and Donizetti for the crown of Italian opera. As this work demonstrates, he was easily in the running. Mercadante expert Michael Rose describes it as ‘one of the highlights of this period’, scoring ‘a triumph’ at its premiere before circulating widely. The libretto (by Felice Romani, the finest practitioner of the art in his day) is set in Paris, following the death of the mighty King Charlemagne, with the city threatened and eventually besieged by Norman invaders. The complex plot centres on Charlemagne’s widow, Berta (sung by Judith Howarth), who was previously secretly married to Ordamante (Riccardo Novaro) in a relationship that produced her equally secret son, Osvino (Katarina Karnéus), now guarded by the loyal Odone (Barry Banks). When Ordamante leads the Normans against the Carolingian forces, father and son are pitted against each other, though the latter initially knows nothing of their relationship. The scene is set for personal and political drama of the highest order in this gripping work from the heart of the bel canto repertoire.

This is the seventh opera in the Essential Opera Rara series and, once again, a vivid impression of the work is captured on a single disc, accompanied by a complete libretto and article by the eminent 19th century musical scholar, Jeremy Commons. 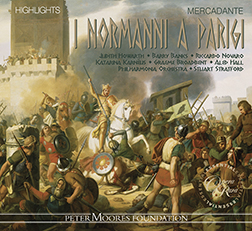