Marking the company’s return to producing artist collections, the two discs were recorded in February with the Hallé and Carlo Rizzi – both of whom will also perform on 14 July – and were curated by Opera Rara’s Repertoire Consultant Roger Parker. With the aim of introducing listeners to forgotten music written by well-known composers including Donizetti, Rossini, Verdi and Berlioz, as well as lesser-known names such as Auber, Halévy and Hérold, over half of the arias recorded were given their world premières by Duprez and Dorus-Gras. While released as solo discs, both Michael and Joyce will also duet on each other’s recordings.

Born in the Lebanon and brought up in Canada, Joyce El-Khoury studied in Ottawa and Philadelphia, before graduating from the Metropolitan Opera’s Lindemann Young Artist Development programme. Today she is one of the brightest young stars in the opera world, recently receiving universal acclaim for her landmark performance of Violetta in La Traviata at the Royal Opera House, Covent Garden. As well as singing extensively in America, she appears widely in opera and concert throughout Europe, including the Bayerishe Staatsoper. She returns to Covent Garden in 2018, but before then will star in Glyndebourne and Madrid, as well as singing extensively in concert.

Joyce has starred in two Opera Rara recordings to date: Donizetti’s Belisario and the award-winning recording of Les Martyrs. Joyce’s album Écho features music associated with the great 19th century soprano Julie Dorus-Gras, including arias by Berlioz, Donizetti, Meyerbeer and Weber. She also duets with her co-star from Les Martyrs, Michael Spyres, whose own recital disc is also released in September 2017, and is available from Opera Rara exclusively from 14th July 2017.

Two complementary recital discs from Opera Rara are exceedingly welcome for the fresh repertory they bring and allowing us to become further acquainted with singers who have not been overly exposed, though that may soon for Michael Spyres once a new recording of Les Troyens hits the shelves in the next few months.

Vocal delights from... the ever-stylish Michael Spyres singing music that might have been written for him – French Grand Opera.

With the festive season upon us, it’s time for some highly prized CD recommendations as suggested gifts for music-lovers. Thanks to the vicissitudes of our postal service, I finally got to sample two remarkable new Opera Rara albums this week that were released in the UK back in September... Both Espoir and Écho offer superbly curated programmes of mainly French repertoire from the 1830s and 40s.

Opera Rara, always an imaginative company with its choice of rare and forgotten opera recordings, has turned its attention to a pair of solo recital albums... It is hard to fault the playing on both albums by the Hallé under conductor Carlo Rizzi... This pair of Opera Rara albums of nineteenth-century operatic treasures from soprano Joyce El-Khoury and tenor Michael Spyres should delight opera lovers in general and admirers of French grand opera in particular.

Both discs are a must for lovers of the repertoire.

This is effectively a double album, though the discs are sold separately. Each one features a talented young singer celebrating a great, neglected voice of the past, in mostly unfamiliar repertoire. Lebanese-Canadian soprano Joyce El-Khoury’s volume centres on one Julie Dorus-Gras, whose career took off in 1830s Paris before she retired in 1850. We get arias by the likes of Donizetti, Meyerbeer, Rossini and Berlioz, all delivered with infectious enthusiasm and impeccable technique. Her flexibility is startling, and there's no hint of harshness in her upper register. What really impresses is her ability to inhabit each aria, helped by some exquisite playing from Carlo Rizzi’s Hallé Orchestra... Who occupies the other disc, the favour repaid with El-Khoury joining him in a duet from Halévy’s Guido et Ginévra. Spyres gives us music associated with the legendary tenor Gilbert Duprez, renowned for his piercing high Cs and for collaborating with the aforementioned Julie Doris-Gras. Donizetti wrote several key roles with Duprez in mind. Spyres delivers them brilliantly, and numbers like “La maitresses du roi” from La Favorite are quietly marvellous. Like El-Khoury, he has a sharp dramatic sense, with every flourish driven by music and text. The high notes are tossed off with a confidence that's never wearying. Enormously enjoyable. Don’t dither about which album to purchase. Buy them both.

Indeed, El-Khoury is never less than stylish with precisely the vocal agility that this repertoire requires... and is splendidly supported by the Hallé on their very best behavior for Carlo Rizzi. If Joyce El-Khoury honors Julie Dorus-Gras on her new CD then Michael Spyres salutes the French tenor Gilbert Duprez... Two sides of the same musical coin, so if you’ve deep pocket then you should treat yourself to both of these admirable releases from Opera Rara... However, this CD is much more than musical archaeology. Spyres is a magnificent addition to that rare band of bel canto tenors who willingly sacrifice vocal heft for supple phrasing.

In recent years we have seen a glut of CDs from singers, often counter-tenors, devoted to baroque music sung by the great castrati of the 18th-century, but tributes to 19th-century singers have been rarer. These two discs are fascinating and can be taken together as well as separately... So both CDS are recommended, particularly the one from Spyres for its choice of repertoire.

Opera Rara treats us to two new releases of distinction this month, from soprano Joyce El-Khoury and tenor Michael Spyres... both releases stand-alone but also make great companion pieces... Parisian audiences for the time were spoiled by having two such incredible singers to bring their roles to life, and fortunately we can say much the same about Spyres and El-Khoury today. Carlo Rizzi’s conducting of the Hallé cajoles and charms throughout.

There’s much to love about soprano Joyce El-Khoury’s new disc, Écho, from Opera Rara. For one, it’s spectacularly sung... The album is also nicely programmed... These were all pieces with which Dorus-Gras was closely associated and, on the merits of this disc, on ehopes El-Khoury will continue to champion them too... Throughout the Hallé and conductor Carlo Rizzi provide an energetic, often colourful accompaniment. There’s a sense of occasion to their playing and to El-Khoury’s singing that’s infectious and, above all, something one doesn’t encounter regularly in studio recordings.

Musical history aside, these discs deserve a place to the shelves due to the extremely high quality of singing on both. El-Khoury supplies firm, sensitively coloured tone and technical finish in everything she does... A similar level of vocal expertise and interpretative expressiveness is evident throughout Spyres’s Duprez tribute, with notable highlights in the refulgent tone he pours into the Cellini aria... Carlo Rizzi conducts with a blend of security and stylistic authority, while the Hallé plays wonderfully for him.

Joyce El-Khoury’s debut recital album is fascinating, with a range of fine early-mid 19th century music, performed with great élan and pin-point accuracy, by a singer who will go far. It’s an album she can be proud of, very well recorded in Manchester with the Hallé under the experienced Carlo Rizzi, and their contribution is a vital part of his recording’s success... But it’s some of the lesser known stuff that most catches the ear, notably, for me, a cavatina from Meyerbeer’s Robert le diable, where the soprano, in effect, duets with a cor anglais. Delightful.

Spyres is fearless in the high-lying parts written for Duprez... [which he accomplishes] to thrilling effect. El-Khoury is especially lovely in her limpid account of Lucia’s Fountain aria, the rare Berlioz transcription of Agathe’s aria from Weber’s Der Freischütz, and arias for both heroines, Alice and Isabelle, from Meyerbeer’s Robert le diable. 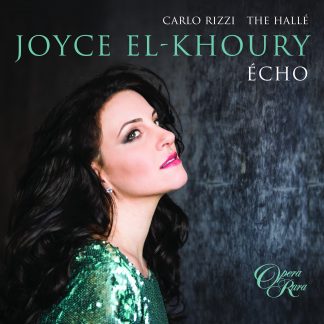