The opera is set in 1347, Calais is under siege by the English army under Edward III. Six noblemen of Calais, including the mayor, volunteer their lives in exchange for lasting peace. The English Queen is so moved by their valour that she persuades her husband to end the siege and spill no more blood.

This is the first performance in 150 years of an opera considered to be Donizetti’s most interesting and visionary work. It is a pivotal score in which the composer is clearly aiming at a more international audience – in fact Paris. As a result of Opera Rara’s discovery, staged revivals have been given in Italy, England and Ireland. The opera is set in 1347, Calais is under siege by the English army under Edward III. Six noblemen of Calais, including the mayor, volunteer their lives in exchange for lasting peace. The English Queen is so moved by their valour that she persuades her husband to end the siege and spill no more blood.

The action takes place in the camp of Edward 111 outside the walls of Calais, and within the besieged city itself. The year is 1347.

Aurelio, son of the Mayor of Calais, narrowly escapes from soldiers in the English camp which he has raided to steal food for his starving family.

Eustachio, the Mayor, and Aurelio’s wife, Eleonora, believe he has been killed, leaving them nothing but their patriotism. Giovanni D’Aire, a burgher of the city, brings them the news that Aurelio has escaped.

Aurelio returns and asks his father what hope there is for their city. Giovanni interprets Eustachio’s silence: only hours remain before the destruction of Calais. Aurelio swears to die before Calais yields to the English. Giovanni reports that some citizens are blaming Eustachio for the situation. When he faces them, a stranger leads the populace in calling for Eustachio’s death, and two of the unknown man’s followers attempt to kill the Mayor. His relatives attempt to defend him, but Eustachio bares his chest and demands the assassins kill him. Impressed by his bravery and dignity they beg his forgiveness. The stranger again tries to rally the citizens to kill their Mayor, saying that it is his pride that has angered the King of England. Eustachio unmasks the stranger: he is no Frenchman, but an English spy. He is disarmed. Eustachio rallies the people of Calais, calling on their love of their country to help them face the certain death that lies ahead of them all.

As Aurelio sleeps, Eleonora prays for God to save Calais. Aurelio wakes from a nightmare in which, he tells her, as he lay on the ground dying from wounds received in battle, he saw an English soldier about to murder their son, Filippo. But Giovanni enters with good news. The English King has sent a messenger with terms of a compromise. Perhaps, after all, there is hope.

In a large room in the Town Hall, the Mayor, magistrates, citizens and soldiers pray for their oppressed city as they await the King’s message. It is brought by an English general, Edmondo, who announces that Edoardo (Edward III) pardons the people of Calais. He asks that in return six citizens of noble birth should be chosen to die as an example to all rebellious cities of France.

The French are horrified, saying that it is too much to ask. Aurelio instructs Edmondo to return to the evil King and inform him that the people of Calais will die in battle before they yield to such a compromise. But Eustachio silences him and tells Edmondo that the demand will be met. Aurelio is shocked. Eustachio tells him that fate is against Calais, the end can only be death in battle. All cries out that are what they want. Eustachio asks them if death is what they want for their wives and children, too. No, says Eustachio, not when the lives of six resolute souls can save their beloved city. He will be the first volunteer. Aurelio wants to take his Father’s place on the list but Eustachio forbids it. Confusion reigns as people try to sign the list. Giacomo adds his name. Armando signs and Giovanni. Aurelio tries again to sign and Eustachio asks him to live and to care for his family, but his finally adds his name to the paper, and father and son, weeping, embrace. They resolve to calmly to the English King. The six hostages sing of their homeland while their families and friends grieve.

In the English encampment Edoardo impatiently awaits the return of his messenger and is overjoyed when Edmondo arrives to announce that the victims are on their way. Edoardo is overjoyed. His glory is assured. France, Scotland and England will be ruled by one hand. His head shall bear three crowns.

Cannon shots announce the arrival of the Queen, and the English soldiers celebrate her victory in Scotland. She is surprised that Calais is still not won, but he assures that the city will be his that very day.

The hostages are then to the King’s tent. Edoardo is surprised to see that Eustachio is one of the victims. The Mayor gives the King the keys of the city. He has honoured his word – let Calais now be saved. Edoardo tells the Mayor that the price of pride will be paid on the scaffold. Eustachio retorts that the scaffold shall be an altar to the victims’ love of their country.

Their relatives arrive to plead for mercy. Edoardo orders them to be removed by force. Eleonora throws herself at the King’s feet. He tells them that they plead in vain, for the slaughter of a few shall be an example to the many. Eustachio instructs them not to beg; that the enemy should admire the way they go to their deaths.

The wives and families of the doomed men take their final farewells. Aurelio weeps as he gives his blessing to his son, Filippo. The Queen and the soldiers are moved by the heart-rending scene.

Finally, the six ask to be taken to their punishment. The English admire this display of courage. The Queen can bear no more and begs the King to relent, for the spilling of their noble blood will stain their victories. Edoardo accedes to her plea to the astonishment and gratitude of all.

Edoardo is hailed for his clemency and his justice and as flags of peace are hoisted, he acknowledges that this rejoicing is more gratifying than any victory. 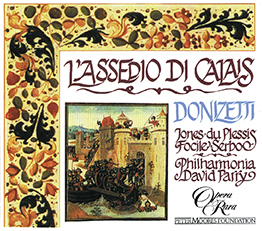