Opera Rara’s acclaimed series of the historical BBC broadcasts of Verdi operas as they were originally heard continues with La Forza del Destino.

Opera Rara’s acclaimed series of the historical BBC broadcasts of Verdi operas as they were originally heard continues with La Forza del Destino. Here for the first time on CD you can listen to the original 1862 St Petersburgh version. And how does it differ from the 1869 version we hear today? The original opera is darker with a grittier integration of text and music and is truer to the original source: Angel Perez de Saavedra’s play Don Alvaro o La Fuerza del sino. Instead of the elaborate overture that Verdi added for the Milan premiere, a brief prelude catapults us into the opening scene. Act 3 ends with the final confrontation between Carlo and Alvaro, instead of the rousing “Rataplan” chorus of the revision, the act concludes with Alvaro’s solo, thereby focussing dramatic tension with far greater intensity on the central issue of the opera; the role of fate in our lives. At the end of the opera, where the later version offers a resolution based on spiritual consolation, Verdi confronts headlong the logical implications of his plot and its brutal consequences. The magnificent cast assembled here includes superb Verdians, Martino Arroyo and Peter Glossop. They interpret Verdi’s original score with a commitment and enthusiasm that will certainly not disappoint.

The Marquis of Calatrava’s castle in Seville
The Marquis says goodnight to his daughter Leonora. He notices how anxious she seems, and assumes it is because he has taken her away from Alvaro, a nobleman of South American extraction whom she loves but whom he regards as unsuitable for her. The Marquis leaves, and Leonora’s maid, Curra, continues with preparations for Leonora’s elopement with Alvaro later that night. Leonora wavers, distressed at deceiving her father and leaving her native Spain; she bids her homeland a sad farewell.

Horses are heard and Alvaro appears on the balcony. Leonora tells him she is reluctant to set off without seeing her father once more. Alvaro persuades her to go straight away and they head towards the balcony. There is the sound of footsteps and the Marquis storms in. He orders his servants to arrest Alvaro, who swears that Leonora is innocent. He throws his pistol to the ground. It goes off, mortally wounding the Marquis, who, dying, puts a curse on his daughter. She and Alvaro leave.

The village of Hornachuelos; 18 months later

Alvaro and Leonora have become separated by circumstances. In the local inn, villagers and muleteers sing and dance and dinner is announced. A ‘student’ says grace. (He is in fact the Marquis’s son Don Carlo, in disguise, and is in search of his sister Leonora and her lover.) Leonora appears, dressed as a man, having recently arrived with Trabuco, a muleteer. She recognizes her brother and quickly goes away again. Carlo starts to question Trabuco about the identity of his travelling companion, but they are interrupted by the arrival of Preziosilla, a gypsy woman. She urges the men to go to Italy and fight the invading Germans, and sings a rousing, patriotic song. Carlo interrupts her to ask her to tell his fortune. She predicts tragedy, and quietly tells him she knows he is not a student.

A band of pilgrims passes by and everyone joins them in prayer. Leonora reappears, prays that she may be saved from her brother’s vengeance, and withdraws. Carlo again asks Trabuco about his companion, who has not joined them for dinner. Trabuco evades answering and goes off to bed. Carlo is prevented from looking for the strange visitor and is asked to explain who he is. He says his name is Pereda and that he has been helping his friend Vargas find Vargas’s sister and her lover, who killed Vargas’s father; the lover, however, has escaped and sailed to America. The assembled company resume their singing and dancing before everyone retires for the night.

A small clearing on the mountain slope with a monastery nearby

In the bright moonlight, Leonora, exhausted, recalls her horror at hearing her brother’s dreadful story; she is particularly distraught at the implication that Alvaro has sailed back to his homeland. She prays for forgiveness. Hearing the monks chanting inside the monastery, she rings the bell. Melitone, the doorkeeper, speaks to her from a window. At first he is reluctant to call the Father Superior, but he eventually does so.

Alone with the Father Superior, Leonora reveals her identity as a woman and asks for the Father Superior’s mercy. He realizes who she is and asks her about her lover and her brother. He tells her she must join a convent. Leonora implores him not to send her away, so he finally agrees that she can live as a hermit in a nearby cave. Melitone summons the monks, who process into the chapel, and the Father Superior gives Leonora a Franciscan habit. He announces to the monks that a hermit is to live in their sacred cave but that anyone who goes there or tries to discover ‘his’ identity will be cursed. Leonora will never see another living soul and should ring a special bell if danger threatens her. Everyone offers a prayer to the Virgin as Leonora walks alone to the cave.

In Italy, near Velletri

In a wood at night, soldiers are playing cards. Their captain is Alvaro, who (under an assumed name) is fighting with the Spaniards. He reflects on his noble birth and his tragic early years and begs Leonora, whom he believes to be dead, to look down on him in his anguish. A cry for help is heard and Alvaro runs to investigate. He returns with Don Carlo, who is now also in the Spanish army, having saved him from assassins. The two men hurriedly exchange false names and swear eternal allegiance, then run off to join the fighting.

An officer’s quarters, near Velletri

Morning has dawned. A surgeon and orderlies watch the nearby battle; Alvaro leads his troops to victory but is seriously wounded. He is carried in, accompanied by Carlo. Praising his bravery, Carlo promises him the Order of Calatrava. Alvaro recoils. He asks to speak to Carlo alone, to request that Carlo carry out his last wish: he gives Carlo a key to a case in which there is a package which Carlo must burn if Alvaro dies.

Alone, Carlo recalls Alvaro’s shudder at the mention of Calatrava and begins to suspect that Alvaro might be Leonora’s seducer. Carlo opens the case and removes the package, wrestling with his conscience about opening it; but he throws it aside. He looks inside the case, however, and finds a portrait of Leonora. Realizing his suspicions were well founded, he vows to kill Alvaro.

The surgeon returns to say that he has saved Alvaro’s life. Carlo expresses his joy at the prospect of now being able to wreak his vengeance.

A military encampment near Velletri; some time later

As the sun rises, the camp comes to life. The women camp-followers give the soldiers drink and Preziosilla offers to tell their fortunes. Trabuco appears, peddling trinkets. A group of peasants arrives; war has destroyed their livelihoods and they beg for bread. Next comes a group of homesick recruits, who are comforted and dragged off to dance. Melitone then arrives and delivers a comic sermon. The soldiers chase him away, leaving Preziosilla to lead a rousing drumming song (‘Rataplan’).

Alvaro appears, followed by Carlo who inquires solicitously about Alvaro’s wounds. He then addresses Alvaro by his real name and reveals his own identity, challenging Alvaro to a duel. Alvaro protests his innocence: it was fate that killed the Marquis. Carlo says that Leonora is still alive. Alvaro is overjoyed, but Carlo vows that she and Alvaro will die. Alvaro and Carlo begin to fight. Alvaro kills Carlo and is overwhelmed by remorse.

A group of soldiers goes past, calling him to fight against the Germans. Alvaro follows them; if he cannot find death on the battlefield, he swears he will give his life to God .

Inside the monastery of Our Lady of the Angels, Hornachuelos; five years later

The bell rings. Melitone opens the gate to Carlo, who asks for Raffaele. Carlo knows that Alvaro thinks him dead and reiterates his resolve to avenge his family honour. Alvaro enters in a monk’s habit. Carlo challenges him to fight, but Alvaro wants only to be left in peace to serve his penance. Carlo will not be placated, even with Alvaro kneeling abjectly in front of him. When Carlo taunts him about his origins, and slaps his face, Alvaro can no longer restrain himself. The two men rush off.

Ashen and distraught, Leonora prays to God for peace and reaffirms her love for Alvaro. She collects the food the Father Superior has left her and retreats hastily into her cave. Carlo and Alvaro approach, locked in combat. Carlo, mortally wounded, calls for a priest so Alvaro bangs on the cave door to call the ‘hermit’ to his assistance. Leonora rings her bell to summon help. She comes out and recognizes Alvaro. He tells her what has happened and that her brother is dying. She runs off to embrace Carlo who mortally wounds her. He then dies having avenged his honour. With her last breath, Leonora forgives her brother, declares her love to Alvaro and says that they will see each other again in Heaven.

The Father Superior arrives with the friars and finds Leonora dead. He calls for Alvaro, but the man has climbed to the top of a cliff and throws himself to his death. 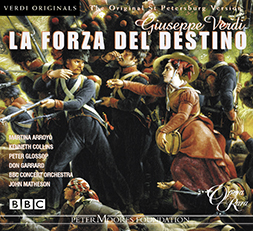