The fifth volume in Opera Rara’s Il Salotto series explores the musical world of London and Milan. In the 1840s and 1850s Milan was still in the throes of Italian unification, while London was basking in the glories of the Victorian Age. Italian composers, led by Giuseppe Verdi, were preoccupied with the uncertain politics of the time and this can be heard in the often-sombre mood of their songs. In London the attitude was musically more convivial, dominated by Luigi Arditis infectious melodies. A Milanese soiree was a serious affair. Love, death and betrayal are the subjects of the dark and beautiful songs by Marliani, Poniatowksi and Belgiojoso. Verdi goes even further with a disturbing song about the meaning of death. Gomes and Pedrotti offer some relief in their romantic pieces but it’s the salons of London that sparkle most. Luigi Arditi, Michael Costa and Vincenzo Gabussi provide the fun that balances the programme. The outstanding feature of this disc is the beauty and variety of the selections. 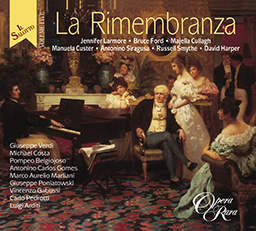