A tragic tale of Christian martyrdom, Les Martyrs began its life as Poliuto, Donizetti’s Italian opera which – due to its religious content – was banned before its Naples premiere.

This release includes a short booklet with the introductory articles and synopsis (English) but no libretto. The libretto is available to download in PDF format below.

A tragic tale of Christian martyrdom, Les Martyrs began its life as Poliuto, Donizetti’s Italian opera which – due to its religious content – was banned before its Naples premiere. Greatly angered by the Italian censors’ decision, Donizetti moved to Paris in the hope of conquering the Opéra de Paris and securing his status as a composer of international repute. His dream largely came true when, in 1838, he signed an agreement to revise Poliuto for the Paris opera. Working together with Eugène Scribe – the grand opera librettist of the time – Donizetti went to great pains to adapt his Italian opera for Parisian audiences. Not only did he add an obligatory ballet score, but he also composed an elaborate new overture, new solos for the lead tenor and several innovative ensemble scenes. Yet, despite the opera’s successful premiere, Les Martyrs soon disappeared from the Paris opera’s repertory and since has only received sporadic performances, often in an Italian version. Opera Rara’s revival is based on a new critical edition by Dr. Flora Willson of King’s College, Cambridge, which restores the opera’s original French text and reinstates numerous musical passages that have note been heard since its first performance.

Hilary Finch in her five star Times review said: ‘The martyred pair — the Christian Polyeucte and his Roman wife and eventual convert Pauline — were cast from strength. Joyce El-Khoury’s soprano flamed fearlessly, but could also taper off into an exquisitely vulnerable half-voice. And the platinum tenor of Michael Spyres focused fanatical love and loyalty: his stratospheric cry within the aria ‘Dieu m’inspire!’ had both orchestra and audience reeling in thrilled admiration. Two outstanding basses, Brindley Sherratt as Félix and Clive Bayley as Callisthènes, revealed shifting shades of obduracy, while David Kempster’s Sévère painted a stalwart and conflicted portrait.’ 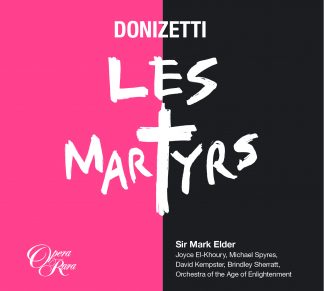