Maria is the mistress of Pedro the Cruel of Castile. Her father, Ruiz, discovers the identity of her lover and, burdened by shame, loses his reason

The most enduring number from this opera was the duet of Maria and her sister Ines, which became a popular concert piece in the 19th century. Maria is the mistress of Pedro the Cruel of Castile. Her father, Ruiz, discovers the identity of her lover and, burdened by shame, loses his reason. Donizetti rises to this dramatic challenge, writing a poignant mad scene – this time for a tenor voice. This was a very successful opera for Donizetti, written in 1841.

‘A fascinating and valuable recording’ – The New York Times

The action is set in Castile, in the middle of the 14th century, at the end of the reign of Alfonso XI and the beginning of that of Pedro I, known to history as ‘Pedro the Cruel’.

The tenants of the Padilla estates bring bouquets of flowers to Ines, who is about to marry Don Luigi, Count of Aguilar. After she has thanked them and they have retired, she is joined by her sister Maria, who is absorbed in thoughts of a recurrent dream that constantly haunts her. In it she sees a cherub, wearing a royal sash, who leads her from the altar to the throne. Ines is horrified to realise her sister’s ambitions, but before either can say more they are interrupted by the sound of hunting horns, announcing the arrival of their cousin, Don Alfonso di Pardo, and his friend Mendez, the favourite of Prince Pedro. Maria confesses to Ines that Mendez is always fused in her mind with her dream, even though he is not of royal blood.

After Alfonso and Mendez have appeared and paid their respects, all move towards the castle chapel for the wedding ceremony. Mendez takes the opportunity of whispering to Maria that he loves her, and asks whether he may hope for her love in return. With deliberate equivocation, she simply echoes Luigi’s cry: ‘To the altar’.

Maria is alone in her bedroom, late that night after the wedding festivities have ended, when Francisca, her old duenna, hurries in and urges her to hide. She has overheard that Mendez, who is none other than Don Pedro, is about to try to abduct her. Maria draws a dagger; then, as Pedro scales her balcony and enters her bedroom, she greets him by his proper name, accuses him of wishing to dishonour her, and tries to kill herself. Pedro manages to prevent her, calling her his wife and swearing to marry her. She holds up the hilt of the dagger in the form of a cross and makes him repeat his oath; then, with her vision of the throne materialising before her, she abandons herself to his arms. He warns her that for the moment their marriage must be kept secret, since his mother is trying to force him into a political match; then leads her towards the balcony and the garden where Don Alfonso is awaiting them.

Two years later. Pedro is now king. He and Maria are married, but Maria has sworn to keep the marriage secret and consequently lives in the palace at Seville as his mistress.

The courtiers, who are attending a splendid reception she is giving in the King’s honour, are divided in their sympathies. Some praise her beauty and piety, while others regard her as an obstacle in the way of the plans of the Queen Mother and the Prime Minister, Duke Ramiro d’Albuquerque, to marry Pedro to the French princess, Blanche, who is already approaching Seville.

Albuquerque ushers in an old man, who proves to be Don Ruiz di Padilla, the father of Ines and Maria. Since he believes that Maria has brought disgrace upon her family, he is easily goaded by the scheming Albuquerque into a determination to be revenged on the King. Awaiting their moment, they make their way into the gardens.

Maria now appears, accompanied by Ines; the one sumptuously attired, with a portrait of Don Pedro suspended from her necklace, the other dressed modestly and simply. Maria’s tears betray her unhappiness at court, and the two sisters decide to seek their father together, to beg his forgiveness, as soon as the reception is over.

As they, too, go out into the gardens, Don Pedro arrives, determined to put aside the cares of state and enjoy the festivities. Don Ruiz, returning in the same moment, expresses a desire to see the King. When Pedro declares himself, it is only to be denounced as a scoundrel and a coward, and to have a glove thrown in his face. Unaware who it is who is insulting him, he orders that the old man be subjected to the ignominious bastinado, or beating with rods.

Only when Ruiz has been dragged away do Maria and Ines return, attracted by the commotion. Unwilling that the success of her reception should be marred, Maria pleads for mercy for the offender. Then, when Albuquerque reveals that it was her father, she is so horrified that she tears off the jewels Pedro has given her and throws them at his feet. He, for his part, promises that Ruiz will be restored to his honours. But Maria will not listen. She curses the day she fell in love, and she and Ines hasten away in search of their father.

From the delirium of rage and tears in which Maria and Ines had found him, Don Ruiz has sunk into a deep sleep and has not stirred for three days. Now, however, as the two sisters and Don Luigi pray for his recovery, he is heard calling for Maria, wishing to embrace her once more before he dies. Maria asks to be left alone with him.

He enters, dressed in a long nightgown, and Maria falls at his feet. But she soon realises that the shame of being beaten has driven him mad. She tries to make him recognise her, but without success. In a supreme attempt to win through to him – even though this means breaking her oath of secrecy – she produces a document and reads to him Pedro’s solemn attestation that she is his wife. But at the sound of Pedro’s name and the sight of his signature, Ruiz burns the document.

Outside a chorus of welcome is heard as Blanche of France enters Seville. In fury, Maria determines to assert her rights. Dragging the bemused Ruiz with her, she leaves for the palace.

In the throne room of the palace, the court is assembled for the coronation of Blanche as Queen of Castile. Pedro has decided to go through with the wedding as a means of revenging himself on Maria, but now that the moment has arrived, he is filled with misgivings.

Trumpets announce the entry of Blanche. Albuquerque, the objective of his schemes almost secured, is in the very act of handing the crown to Pedro, telling him to place it on the brow of his bride, when Maria, closely followed by Ines, Luigi and Don Ruiz, suddenly appears and snatches it from him. She places it on her own head, and claims her right to be recognised as Pedro’s wife. There is general consternation and Blanche faints.

Pedro is suitably appalled to see the state to which Ruiz has been reduced, and increasingly incensed as the courtiers reproach him for not arresting Maria. Then suddenly he asserts himself, and proclaims openly that she is his wife, his queen, and the sole object of his affections.

Maria, beside herself with joy, throws herself into her father’s arms. But though Pedro, Ines and Luigi herald her as queen, the courtiers murmur among themselves, predicting reprisals on the part of France.

A fascinating and valuable recording 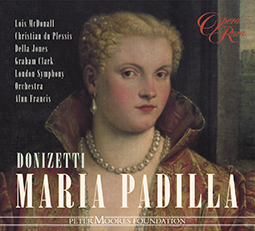