Donizetti’s gripping opera, Parisina, comes from a particularly fruitful period in the composer’s life. The opera made its 1833 debut in Florence, the year Lucrezia Borgia opened at La Scala and Torquato Tasso premiered in Rome, with a libretto by leading exponent of his craft at that time, Felice Romani.

Donizetti’s gripping opera, Parisina, comes from a particularly fruitful period in the composer’s life. The opera made its 1833 debut in Florence, the year Lucrezia Borgia opened at La Scala and Torquato Tasso premiered in Rome, with a libretto by leading exponent of his craft at that time, Felice Romani. Though it was widely staged during the two decades following its premiere, the opera is rarely performed today. Opera Rara hopes the work’s fortunes will change with this new recording, cast from strength and led by the Parisina of Carmen Giannattasio and José Bros as Ugo.Even for an early romantic melodrama, the plot is unusually dark. Parisina, daughter of an exiled nobleman, has been raised in the Court of Azzo, a 15th century Duke of Ferrara. Azzo pledges to recover her father’s lost states and marry Parisina. But, Parisina has secretly fallen in love with her childhood companion, Ugo, an orphan who was taken in by an elderly minister and educated among Azzo’s pages and, who it is revealed, is the son of Azzo’s previous marriage.Azzo’s worst suspicions are confirmed as Parisina lets slip her love for another under the silky sedation of sleep. In furious anger at her outlandish passion, and in one of the most electrifyingly dramatic moments in all opera, Azzo has his own son murdered and presents the anguished stepmother with the corpse. This horrifying scenario was just the sort of passionate narrative to set the composer’s musical pulses racing. As Azzo’s fury explodes, driving strings swirl up over a striding bass and, according to biographer, William Ashbrook, “Donizetti unleashes a dramatic energy unequalled by anything he composed up to this time….Parisina contains some of Donizetti’s most vivid musical portraiture….Amongst the composer’s seventy operas, this expressive psychological piece was the one that Donizetti himself favoured most – quite an endorsement.”

Visit the official YouTube page to hear an excerpt from this recording: Parisina

A certain Lord of Carrara, a member of the Guelph faction, was ejected from his territories by the Ghibellines, and sought shelter at the court of Azzo (historically Niccolò III, Duke of Ferrara), one of his friends and a fellow-Guelph. His daughter Parisina consequently grew up at Azzo’s court, where she fell in love with Ugo, an orphan who, taken under the wing of an elderly minister, Ernesto, was educated among the Duke’s pages. Her love was reciprocated, but when Azzo pledged himself to help her father recover his estates and sought her hand in marriage as his reward, she was obliged to yield to parental wishes and marry against her will. Her love for Ugo was, however, in no way diminished – nor his for her.

Azzo, insecure and jealous by nature, especially since he had been betrayed in an earlier marriage, watched the young couple with suspicion, and drove Ugo away from court upon the pretext of giving him a military training.

The action of the opera begins at this point.

SCENE 1. A hall in Azzo’s summer palace on the island of Belvedere in the River Po. Ernesto, arriving from Ferrara, enquires after the Duke, but it is only to learn that he is disturbed, and as suspicious of Parisina as ever. She, for her part, is downcast and unhappy, and shuns all company.

Azzo appears, and Ernesto seeks to lighten his mood by announcing that, thanks to the assistance given by Ferrara, the Lord of Carrara has recovered his territories. Azzo gives instructions that Parisina be informed of this welcome turn of events, and orders that jousts, tournaments and riverboat races be organised at Ferrara and upon the Po in celebration. He reveals to Ernesto, however, that this show of joy is only a veneer, designed to disguise his deep conviction that Parisina is betraying him, just as his earlier wife Matilde did. He bids Ernesto warn Ugo not to set foot in Belvedere and Ferrara until he himself summons him back.

Ernesto has no time to act upon this order, for he is no sooner alone than Ugo appears. Rebuked for returning so rashly, he confesses that it is love that has brought him back – his unconquearable and uncontrollable passion for Parisina. Ernesto urges him to leave, and he agrees to do so, but not without seeing Parisina. All Ernesto’s efforts to dissuade him are in vain.

SCENE 2. A garden, with the River Po in the background. Parisina, her confidante Imelda and her other ladies-in-waiting are resting in the shade. Urged to be lighter of heart on such a joyful day, Parisina insists that it is her natural disposition to be dejected and tearful. Knights and squires come to invite her to grace the jousts in Ferrara with her presence, but she replies that her heart recoils from such festivities.

As the knights retire, one, who is wearing a helmet, remains. Even before he has time to raise his vizor, she recognises him by his voice, and orders her ladies to withdraw, but to remain within earshot. In response to her exclamations of surprise and alarm, Ugo asks how he could possibly go into exile without seeing her one last time. She urges him to blot her from memory, but his reply is to press her to admit that, had things been different, she would have loved him just as he loves her. She gives him her handkerchief as a keepsake, but before he has time to leave her ladies come running to warn of the approach of the Duke.

Azzo demands to know why Ugo has dared to come back to court so secretively. Ugo’s reply is that he had his commander’s permission to return, and that it has only been since his arrival that he has learned of his banishment. Parisina tries to intervene by saying that he had sought her out to her to beg her to intercede on his behalf. Azzo, not to be deceived, determines to dissemble and to keep constant watch on the couple.

The ducal barge arrives to carry all to the festivities in Ferrara, and Parisina, despite herself, is forced to join the departing throng.

SCENE 1. Parisina’s bedchamber in the Ducal Palace of Ferrara. Her ladies report to Imelda that she seemed unexpectedly cheerful at the tournament, and smiled most graciously upon the winning knight, Ugo, as she crowned him victor. Azzo, sitting beside her, showed every sign of being pleased at her evident enjoyment of the occasion.

When Parisina enters, she is weary from such unaccustomed pleasures, and declares that, rather than attend the evening’s feasting, she has need of sleep. Her ladies, after disrobing her, retire, leaving her to go to bed.

Azzo enters and gazes upon her, trying to convince himself that she could not sleep so peacefully unless she were innocent. But as he watches, she begins to speak in her sleep, breathing aloud the name of the man of whom she is dreaming. And the name that she pronounces is not ‘Azzo’ but ‘Ugo’. Azzo erupts in fury, and Parisina awakes in alarm and terror as he brutally tells her what he has overheard. He forces a confession from her, and is on the point of drawing his dagger to slay her. But when Parisina urges him to do so, welcoming death as a release from her suffering, he desists, spurns her, and departs.

SCENE 2. A gallery in the palace, where the evening’s festivities are at their height. Ugo is concerned that Parisina has not appeared, and finds himself severely rebuked by Ernesto for his rashness in continuing to haunt the palace in the hope of seeing her.

Suddenly the festivities cease, and terrified courtiers bring news than an irate Azzo has sealed off the palace. Men at arms enter and Ugo is arrested. He takes an emotional farewell of Ernesto as he is led away.

SCENE 3. A vestibule leading to the towers of the Ducal Palace. Azzo has Parisina and Ugo brought before him. Both are in chains. Parisina confirms her love for Ugo, but declares that, though all three of them are doubtless guilty, she and Ugo are so only in thought and wish, whereas Azzo is so in deed.

Azzo orders that they be led back to their cells, but at that moment Ernesto forces his way in, maintaining that he comes to prevent the Duke from committing a horrendous crime. If he were to have Ugo executed, he would, he maintains, be killing his own son, for Ugo is the offspring of the repudiated Matilde. Azzo, taken aback, after reflection consigns the young man to Ernesto’s care, bidding them go before he has time to change his mind. Parisina, on the other hand, he insists must remain at court.

SCENE 1. A gallery in the Ducal Palace, with a chapel on one side. The chorus reports that Parisina, silent and insensible, lies at the foot of the altar. After they have retired, however, she makes her appearance, lamenting that her prayers can no longer ascend to heaven.

Imelda brings her a letter from Ugo, in which he proposes that she should flee with him: when the bell from a neighbouring cloister strikes one, he will come to her by a secret passage and escort her to her father’s protection.

The hour strikes, but it brings, not Ugo, but the sounds of a prayer for the dead. Parisina’s ladies try to lead her away, but Azzo enters, declaring that his moment of revenge has come. At his order, windows at the rear of the gallery are opened, and the body of Ugo is seen on the terrace beyond.

In a paroxysm of grief, Parisina collapses in convulsions and dies. 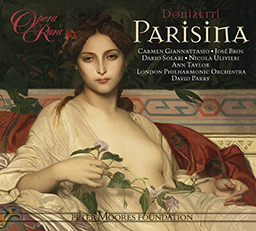