Review the full reivew at: FT.com

Sir Mark Elder has recently been described as “a born-again Donizettian” by both The Sunday Times and BBC Music Magazine and the recording of Rita marks the sixth opera by Donizetti that Sir Mark has conducted with Opera Rara, as well as the first that Opera Rara will have made with the Hallé, of which Sir Mark is Music Director. The recording is sung in the original French, with Katarina Karnéus in the eponymous role of Rita, Barry Banks as Pepé and Christopher Maltman as Gasparo.

Written in 1841, with a libretto by Gustave Vaëz who had co-written the French libretto for Lucia di Lammermoor, Rita was the only complete opera by Donizetti not to have been premièred in his lifetime. The one-act opéra-comique received its posthumous première at the Opéra Comique, Paris on 7 May 1860 where it had originally been scheduled over two decades earlier. Despite Donizetti’s efforts to have the libretto translated into Italian for the Teatro del Fondo in Naples, the untimely death of the Teatro’s impresario led to the performances being cancelled.

The new edition on which the recording is based was created from Donizetti’s complete autograph score and a recently discovered manuscript libretto with autograph annotations. It restores the French spoken dialogue originally intended for the opera without the apocryphal additions which were introduced for its première in 1860.  Donizetti’s works have been at the heart of Opera Rara’s repertoire since it was founded more than 40 years ago, and Rita is the 22nd complete opera by Donizetti to be released.

RITA has married an unassertive bumpkin, Pepé, believing that her first husband, Gasparo, has drowned at sea. Gasparo arrives unexpectedly at Rita’s inn to check out a rumour that Rita has died. Pepé recognises the name on his passport and sees in the stranger a means of escaping his temperamental Rita, who often beats him. Gasparo, who has been planning to marry a Canadian
girl, cajoles Pepé into suggesting a game of morra and then into drawing straws to see which of them wins the wife neither of them wants. When Pepé accuses Gasparo of cheating, Gasparo shows him the long straw, and for a while Pepé has the illusion of freedom. Gasparo tries to persuade Pepé, apparently in vain,
that a husband should stand up to his wife. By pretending to have a useless arm, Gasparo provokes Pepé into fighting him. At the sight of her husband asserting himself, Rita, who has not only dealt out blows to Pepé but received them from Gasparo, is as happy to be reunited with Pepé as Gasparo is contented, having gained possession of his old marriage-licence, to return to Canada.

This one-act operatic comedy is a little gem and if you haven’t discovered it before, now’s the time. It was the first by Sir Mark and the Hallé for the label of which he’s Artistic Director… **Top CDs of 2015**

In Mark Elder’s hands, this is a frothy, elegant and very French-sounding score…

Mark Elder propels the score with liveliness, rushing nothing, pushing nothing, so that the little work is given the light touch that it needs… It should bring pleasure to anybody who is attuned to Donizetti, as Elder obviously is.

Opera Rara have done their usual superb job with recording and packaging… It’s late Donizetti, therefore it’s tuneful and crafted. Orchestra and conductor couldn’t be bettered and the three principals are first rate.

And on this recording, the chief pleasure is probably the gloriously buoyant and beautifully turned playing of the Hallé Orchestra, with Mark Elder finding an ideal balance between subtlety and air exuberance. The ‘two men and a woman’ Opera Rara has found clearly enjoy themselves immensely, too, and the sense of fun is infectious.

All previous recordings of the opera have been in clumsy Italian, but this new one, as one expects from Opera Rara, is in the original language. All told it provides an extremely enjoyable listen, its mixture of charm and spitefulness redolent of L’elisir d’amore… The packaging, by the way, is of a standard which no other company emulates, though all should. The singers make a great team, but what makes it so much fun is Mark Elder’s immersion in the work, which sounds almost as if it was Haydn on top form. The Hallé is impeccably idiomatic… this is an ideal production.

Opera Rara’s latest exhumation is this obscure Donizetti one-acter… it’s hard to imagine the piece sounding better than it does here. Mark Elder and a slimmed-down Hallé Orchestra accompany in some style… There are so many choice moments – generally the ensemble numbers where each character reveals what they’re really thinking… Diction is excellent, so anyone with a decent grasp of French will be able to follow the onstage shenanigans with ease. Opera Rara’s booklet is a joy to read what a pleasure to find a CD libretto which you can read without recourse to a magnifying glass.

The vision of the founders of Opera Rara has greatly facilitated our knowledge of one of the most prolific and skilled of the great bel canto opera composers. He is now better known and understood than would otherwise have been the case. This recording marks another landmark being (Wagner excepted), to the best of my Mancunian knowledge, the first commercial opera recording the Hallé Orchestra have made and certainly the first under their Music Director, Sir Mark Elder, who is also Opera Rara’s Artistic Director… Although of a significantly better quality of performance than that from Bergamo, like that issue it is a welcome addition to the catalogue of the composer’s works. Long may that expansion continue. Opera Rara are currently raising finance for a recording of Les Martyrs, another of Donizetti’s opera premiered in Paris (1840). Contributions from Donizetti enthusiasts will be welcomed and enable Opera Rara to bring yet another Donizetti opera before the public.

Thanks to some superb singing, this irresistible recording from Opera Rara makes a compelling case for Donizetti’s neglected comic opera… If there’s any justice in the world, it will find greater appreciation after this irresistible recording from Opera Rara, based on a recently-discovered original libretto… Mark Elder’s crisp, nuanced conducting keeps all the plates spinning delightfully.

The CD comes with the usual admirably created Opera Rara booklet, with an extensive article on the work’s history along with images of early performers. It is lovely to see Opera Rara still on good form, with Mark Elder at the helm after the death of founder Patric Schmid. There is much to enjoy and delight here. Mark Elder has been a fine stalwart of Opera Rara recently and it is lovely to hear him on form with his home orchestra. The Hallé’s playing has the right combination of sparkle and sprightliness and I do hope we get more from them on Opera Rara… highly recommended!

There may be some truth in the adage that there are always good reasons why an opera sinks into obscurity, but all lovers of the art owe Opera Rara a great debt. Established in 1970, this small Shoreditch-based outfit is unique in focusing on neglected or despised works of the 19th-century Italian and French repertoires, in particular the enormous oeuvre of Donizetti. It does the job of resuscitation to a very high standard… Donizetti’s Rita and Offenbach’s Fantasio are the latest exhumations, to be followed later this year with Donizetti’s Les Martyrs… This is an enterprise of considerable musicological value, as well as a delight for jaded buffs who know La Bohème and Carmen inside out and back to front… Schmid sadly died and Parry withdrew, to be succeeded by Sir Mark Elder, a superb exponent of Donizetti’s music, Prof Roger Parker and the vocal coach John Fisher. There couldn’t be a better team for this work, and one hopes that some nice old lady can sign the necessary cheque. Opera Rara is a luxury, in this day and age, but it’s one that enriches our operatic culture.

At long last, Opera Rara — ever a source of innovative efforts at revisiting rather than revising overlooked gems of bel canto — have given Rita an opportunity to parade before the footlights in the clothes her composer cut for her, and what a chic lass she proves to be!…
Having set about the business of righting the wrongs to which Rita was subjected during the past 160 years, Opera Rara sealed the deal by recording a performance in which every piece of the musical puzzle falls into place with naturalness and rollicking high spirits. Under the confident, consistently stylish leadership of Sir Mark Elder, the impeccably-trained musicians of the Hallé play with such sheer fun that they might be mistaken for the residents of an Italian opera house pit—except, that is, for the indefatigable accuracy of their playing… Maestro Elder conducts with an easy grasp of Donizetti’s style, and the dependable sophistication of his pacing of the performance enables the cast to focus on getting inside their roles.

Rita marks a renaissance for Opera Rara, a label that faced an uncertain future after the death in 2005 of its founder and spiritus rector, Patric Schmid. It now has a new artistic director – eminent Donizettian Mark Elder, who conducts the Hallé Orchestra in this recording – and a fresh set of advisers dedicated to fulfilling Schmid’s goals. Opera Rara is virtually the only company still making studio recordings of complete operas, while seeking a perfection of performance in respect of vocal, stylistic and textual authenticity… While it might have been preferable to have native French speakers, Katarina Karnéus, Barry Banks and Christopher Maltman bring Rita to life with infectious spirit. 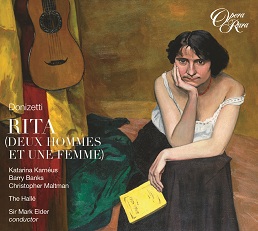