Offenbach’s 1867 version, loosely based on Daniel Defoe’s classic, Robinson Crusoe is a hopeless romantic who runs away to sea only to be shipwrecked.

In Offenbach’s 1867 version, loosely based on Daniel Defoe’s classic, Robinson Crusoe is a hopeless romantic who runs away to sea only to be shipwrecked. His fiancée and her two servants set out to find him and themselves fall into mishap. With the help of Man Friday the whole company is rescued from drunken pirates and waltzing cannibals. The excellent English translation is superbly sung by a strong cast.

Inside the Crusoe’s home, in Bristol
While Suzanne, the maid, Lady Crusoe and her niece Edwige prepare for Sunday tea, Sir William Crusoe pointedly reads the parable of the Prodigal Son. Robinson arrives, late as usual, but soon charms his way out of a scolding. Taking Toby, the Crusoe’s factotum, aside, he explains that he has booked passages to South America for them both that very night. They are overheard by Suzanne, Toby’s fiancée. Edwige, realising that she is in love with Robinson, begs him to stay, but to no avail. Even when Toby withdraws from the venture – at Suzanne’s insistence – Robinson knows he has to go alone to seek his fortune.

Scene I A desert island at the mouth of the Orinoco
Six years have passed. Robinson’s ship has been captured by pirates and he has escaped with his life to this desert island. His only companion is Man Friday, rescued by Robinson as the poor native was about to be sacrificed to the god Saranha by the Tamayos, a cannibal tribe also resident on the island. Robinson yearns for Edwige and tries to explain to Friday that one day he too will fall in love – but the native doesn’t understand.

Scene II Another part of the island
Tired of waiting for Robinson’s return, Edwige has set out in search of him, taking with her Suzanne and Toby, now man and wife. Their ship, too, has been captured by pirates. Set adrift, they have arrived on Robinson’s island. Suzanne and Toby are captured by cannibals and handed over to the cannibals’ chef, none other than Jim Cocks, a neighbour from Bristol who had run away to sea ten years before and suffered a similar fate. Now, he informs them, they are about to be the ingredients of the cannibals’ dinner that night. As the sun sets, Edwige is led in by the natives. Her blonde hair and fair complexion have let them to believe that she is the white goddess of their legends who will arrive from across the sea and who, when burned at the stake, will become the bride of Saranha. All this is observed by Friday who has fallen instantly in love with Edwige. As the funeral pyre is about to be lit, he fires Robinson’s pistol, and as the savages run off in fright, he rescues the three victims and Jim Cocks.

Scene I Robinson’s hut
Robinson, returning from a night of vigil, watching for a ship, is told by Friday not to wake the goddess. Edwige and Robinson are reunited. Suzanne, Toby and Jim Cocks are delighted to find that Friday’s master is none other than their own Robinson. He tells them that the pirates have put ashore for supplies and this is their chance to take over the ship and return to England.

Scene II The lagoon
The carousing pirates make fun of Robinson who pretends to be mad. He tells them a tale of buried treasure and they rush off into the jungle, where they are immediately set upon by the cannibals. With the pirates’ muskets, Robinson now holds the upper hand. The pirates beg him to save them. Despite their wickedness, he agrees if, as they sail for Bristol once again, Captain Atkins will marry Robinson and Edwige aboard the ship. And all – perhaps even the pirates – live happily ever after. 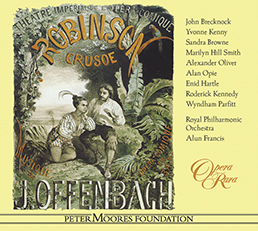