Nelly Miricioiu and Renée Fleming, as Eleanor of Aquitaine and the fair Rosamund, battle for the love of Bruce Ford (Henry II of England).

Nelly Miricioiu and Renée Fleming, as Eleanor of Aquitaine and the fair Rosamund, battle for the love of Bruce Ford (Henry II of England) in one of Donizetti’s more intimate serious works. A cholera epidemic in 1837 prevented the performance of the revised ending – given here complete for the first time – in which the jealous Eleanor stabs her rival.

‘The performance could hardly be improved. As always with Opera Rara’s productions, the booklet adds substantially to the value of the set and contains a first-rate introduction by Jeremy Commons’ – John Steane, Gramophone

In the park of Woodstock Castle, tenantry and farming-folk gather to acclaim Enrico (King Henry II) upon his return from his wars in Ireland. As they hasten away to greet him, Leonora (Queen Eleanor) appears, followed by the King’s page, Arturo. We learn that Arturo was once, as a young orphan, taken under Leonora’s protection, and consequently feels deeply indebted to her. As a result of these feelings he has allowed her to prise a momentous secret from him: that Enrico has a mistress, and that upon his departure for Ireland he lodged her in a tower here at Woodstock and left him – Arturo – to watch over her. The secret of her identity is so closely guarded that even Arturo does not know her name. Leonora is not slow to perceive that the page has fallen in love with his charge: she encourages him by suggesting that she will help him win her for himself, but at the same time she clearly seethes to be revenged upon her rival.

Leonora and Arturo retire as the country-folk return, strewing flowers in Enrico’s path. The King is delighted to lay down his arms and looks forward to returning to the joys of love. Before he can depart, however, he is accosted by his elderly tutor, Clifford. It is a particularly unwelcome and embarrassing encounter, since his mistress is none other than Clifford’s daughter, Rosmonda. Clifford, for his part, is totally unaware that his daughter has fallen from grace: he has been absent on a diplomatic mission in France, and believes that she is at home awaiting his return. He has, however, heard rumours that the King has deserted Leonora and taken a mistress, and in his capacity as the King’s mentor he takes it upon himself to rebuke him. He demands to see the unfortunate woman, whoever she may be, in order that he may try to lead her back to virtue. Enrico agrees to allow him to see her, though he urges him to be guided by compassion, and assures him that, once he knows her identity, he will be only too pleased to see her mount the throne of England.

Rosmonda is alone in her tower. It is three months since her lover, whom she knows only as ‘Edegardo’, went away, leaving her in Arturo’s care. Absence has clearly made the heart grow fonder: she has been missing Edegardo’s company most sorely. But it has also had a contrary effect, for it has given her time to appreciate the enormity of her conduct. Consequently she is now torn between love and remorse. As she accompanies herself upon her harp, and sings of her sorrows, Arturo from the gardens beneath echoes her song in sympathy.

Arturo brings news of her lover’s return, but adds that certain ‘concerns of the King’ keep him from her yet a while. In the meantime, permission has been given for an elderly knight to wait upon her. Rosmonda is horrified to hear that her visitor is none other than Clifford, and she confesses her identity to Arturo. But she has no time to escape: taken by surprise and utterly unprepared she finds herself alone with her father. For a moment Clifford fails to recognise her, but then, the full situation dawning upon him, he bitterly reproaches her, and is only prevented from cursing her by her distress and evident remorse. Now Rosmonda learns her lover’s identity for the first time, and when Enrico himself is heard, calling to her from without, she faints.

Enrico is distressed to see her plight, and all the more so since, as she recoveers consciousness, she bids him quit her sight and return to Leonora. At this point Leonora also appears, accompanied by the whole court. She feigns surprise, asking why she should find everyone so obviously embarrassed: the King looking angrily upon her, Clifford disturbed, and a maiden in tears. Clifford presents his daughter, and beseeches the Queen to take her under her protection. Leonora agrees to do so, but Enrico, suspecting her malignant intentions, intervenes and, informing her that her reign is over, bids her be gone. The act ends in general and hostile confrontation.

The great hall of Woodstock Castle. Enrico’s councillors reluctantly agree that, if his marriage is so irksome to him, he should repudiate Leonora. He replies that she is more dangerous to him in England than in her own Aquitania, and orders that she should be sent back to France the next day.

Leonora herself, however, is determined not to be disposed of so easily. As the councillors retire, she waylays Enrico and tries, first by reasoned argument, reminding him of the aid she gave him in gaining the throne, and then by seeking to reawaken his love, to win her way back into his affections. He remains impervious to her wiles, and their encounter ends in fresh threats and recriminations.

A gallery in Rosmonda’s tower. Arturo, alone, expresses his love for Rosmonda, but fears that, since he is a mere page, his suit is no match for that of the King. He regrets that he has allowed himself to become a tool of the Queen, but sees no help for it: he is too deeply indebted to her and too involved to have second thoughts now.

Hearing a knocking at a secret door and believing it to be the Queen, he goes to open it. To his surprise he finds that it is Clifford, who, imprisoned by Enrico but released by Leonora, has come to tell Rosmonda that she must leave England at once – within the hour: it is his wish that Arturo should escort her to Aquitania and there marry her. The proposal surprises Arturo quite as much as it does Rosmonda. Though Rosmonda agrees to leave Enrico, she at first pleads against any alternative marriage; but then, urged by both Clifford and Arturo, she eventually capitulates and agrees to all her father’s wishes.

Left alone, she is found by Enrico. He attempts to win her over by informing her that the primates of England have agreed to their marriage. The whole kingdom, he assures her, will welcome her as queen. But she remains adamant, insisting that she can never be queen: he is already married to Leonora, and she has now sworn to leave him forever. As the hour strikes, she tears herself away from him.

A remote part of the gardens of Woodstock, where Rosmonda has agreed to meet Arturo in order that they may set off together for Aquitaine. Leonora’s followers are on the watch to see whether she will keep her appointment, and retire into the shadows as she does so.

Rosmonda is surprised to find that she is the first to arrive, and wonders what can have detained Arturo. She hears someone approaching, but, far from being the page, it proves to be the Queen. Leonora accuses her of revealing her planned flight to the King – why else should there be so many guards patrolling the gardens? – and draws and brandishes a dagger. Rosmonda protests her innocence, insisting that she is here only in fulfilment of her father’s wishes that she should quit England forever. Leonora appears to be almost convinced, but at this unlucky moment her followers return, informing her that an armed Enrico and his henchmen are approaching. In panic and despair she again raises the dagger, and this time the blow descends and finds its mark: as Enrico and Clifford arrive, it is only to have Rosmonda fall dying into their arms

A distraught and anguished Leonora now rounds upon Enrico, reproaching him for goading her to such an extremity of violence: it is he, she insists, who is ultimately to blame, though both of them must expect to be pursued by Heaven’s vengeance. 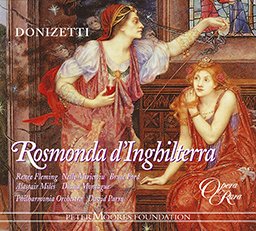