Opera Rara chose this most obscure of Donizetti’s operas on the strength of its many beautiful and intricate ensembles. A convoluted plot culminates in the magnificent poison scene, conceived as a vehicle for the talents of the great singing actress Giuditta Pasta. Della Jones, Janet Price, Eiddwen Harrhy and Yvonne Kenny make their recording debuts for the first of Opera Rara’s Donizetti revivals.

Opera Rara chose this most obscure of Donizetti’s operas on the strength of its many beautiful and intricate ensembles. A convoluted plot culminates in the magnificent poison scene, conceived as a vehicle for the talents of the great singing actress Giuditta Pasta. Della Jones, Janet Price, Eiddwen Harrhy and Yvonne Kenny make their recording debuts for the first of Opera Rara’s Donizetti revivals.

ACT 1 Part 1. In the Palace of Laon, noblemen of the court offer prayers on the accession of their young king, Luigi V. To their prayers, Folco di Angiò adds his curse, that Luigi should suffer the same fate as his father, Lotario – to reign despised by his queen, and die by her wickedness. As trumpets sound, the royal retinue enters. Ugo announces to the assembly that the day has arrived for him to lay down his regency and return the throne to Luigi. As the Queen Mother, Emma, places the crown on Luigi’s head she prays that it may rest there more happily than it did upon his father’s. Luigi swears that his first task will be to avenge his father’s death.

Ugo advises him that his subjects would prefer to see him in the role of conqueror against the enemies of France. The young king quickly agrees and visualises himself as the saviour of his country, a new Charlemagne. The court leaves for the cathedral.

Alone in her rooms, Bianca awaits the arrival of her sister, Adelia. Her ladies in waiting enter to tell her Adelia’s cortege can be seen in the distance. Bianca plans how she will use Adelia to escape from the prospect of an unhappy marriage.

She dismisses her ladies as Adelia enters, and her sister is surprised that Bianca has not gone to the cathedral with her husband. Husband-to-be, Bianca corrects her, and confesses that she desires another as her husband. Bianca begs her sister to tell the king not that Bianca has sent for her, but that she brings a summons from their mother for Bianca to return to beleaguered Aquitania. She adds that Adelia’s refusal to do so can only lead to tragedy for Bianca hates Luigi and his mother…and loves Ugo. Adelia is distraught by this news but finally yields to Bianca’s pleas, and they prepare to leave Laon.
Luigi enters and asks Bianca where she is going. Despite Adelia’s confirmation, Luigi is suspicious of Bianca’s story and orders her to remain in Laon. However, if she will allow their wedding to take place immediately he himself will escort her to her mother’s side. When Bianca refuses he accuses her of being in love with another man.

Part II. Ugo is overjoyed to find Adelia in the palace. She refuses to tell him the reason for her unhappiness. He asks if Bianca has turned her against him, but Adelia replies that nobody could prevent her from loving him. She warns him to keep out of Bianca’s way, but will not tell him why, and unhappily he leaves her.
Bianca enters to tell Adelia that Luigi has forbidden her to leave the palace and that she has decided to seek Ugo’s protection.
Luigi enters with Folco and his noblemen, and demands to know why Bianca refuses to marry him. He does not believe the story of Bianca’s concern for her mother’s well-being, and sends for Ugo.

Luigi tells Ugo that the sisters fear for their mother’s safety and commands him to lead their army against the Normans, and to give the Queen of Aquitania his pledge that when all is safe Luigi himself will bring Bianca to her side. ‘And must my mother remain without a daughter by her side until then?’, Bianca asks the king. Adelia will be with her, he replies, for she will travel to Aquitania with Ugo. But Bianca will not hear of it and her violent outburst enrages Luigi. He accuses Bianca and Ugo of being lovers. Ugo, shocked, denies it, but Bianca tells the king it is the truth, she loves Ugo. Ugo denies it again and tells Luigi he loves another. Another? What is her name? Bianca demands. Seeing Adelia’s look of fear, he refuses to answer, but turns on Bianca and accuses her of shaming not only his name, but the name of France. Folco demands Ugo’s sword, and Luigi swears to be avenged against the traitors.

ACT 2 Part III. In prison, Ugo regrets not having told the king that it is Adelia he loves, but her fear kept him silent.
Bianca enters and begs Ugo to flee with her to Aquitania. When he refuses she demands the name of her rival. Ugo will not answer. Adelia enters, but stops when she sees Bianca. Bianca takes Adelia’s arm. ‘Look me in the eyes’, she says. ‘Tell me the truth…you love him?’ Adelia tries to deny it, but Bianca tells her that the look on her face has revealed everything. At last Adelia confesses she loves Ugo.
The sound of battle is heard in the distance as knights and soldiers arrive at the prison to tell Ugo that France stands behind him against the king. As Ugo leaves for the battlefield Bianca tells him that he will never be safe from her revenge.

In the royal apartments the women weep as the battle rages. Luigi and Emma enter. She tries to tell her son that it is not Ugo he should fear, but the treachery of Folco. Luigi refuses to listen. Knights enter to tell him that the battle is over and that it was Ugo himself who persuaded the attackers to lay down their arms.
Ugo enters with Adelia. He tells Luigi that he has no designs on Bianca or the throne of France; Adelia is the woman he loves. Adelia confirms that it was her fear of Bianca’s jealousy that kept Ugo silent. Ugo offers his sword to the king: I am willing to return to prison if you still doubt me. Keep your sword, the king replies, and gives permission for the immediate marriage of Ugo and Adelia.

Part IV. Outside the royal chapel, Folco tells Bianca of the impending marriage of Ugo and Adelia, and insinuates that there is still time for her to take revenge. He tells her that her revenge does not need to be the sword and reminds her that on this very spot Lotario was poisoned. He leaves her.
Bianca trembles as she prepares the poison. ‘I was not born to crime’, she says, ‘but now it is too late’; her heart and mind are silenced by the insane jealousy gnawing at her. As she goes to enter the chapel she hears a cry.

It is Emma praying for forgiveness for the mistake she made and has repented for five unhappy years. Bianca is struck with horror and cries out that if this is the reward of vengeance then let God strike her down or change her heart within her.
Emma enters. Bianca tells her that she has overheard her prayers, and begs her for help: save me from myself and from committing a crime I shall always regret.

Emma takes her in her arms and tells her that no revenge is worth the agony of torment and grief she would have to suffer. Suddenly the wedding ceremony begins inside the chapel. Bianca’s anger flares up again and Emma calls for the guards.

Everyone comes running from the chapel. Bianca, defeated, drinks the poison herself. How I would have loved you, she tells Ugo, and how I hate you now. Her death, she tells the horrified assembly, is her revenge, and she falls into the arms of her attendants. 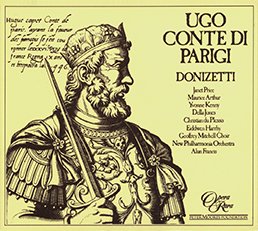