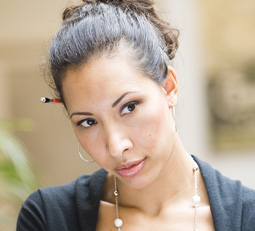 Nicole Cabell, the 2005 Winner of the BBC Singer of the World Competition in Cardiff and Decca recording artist, is fast becoming one of the most sought-after lyric sopranos of today. Her solo debut album, “Soprano” was named “Editor’s Choice” by Gramophone and has received critical acclaim and several prestigious awards: the 2007 Georg Solti Orphée d’Or from the French Académie du Disque Lyrique and an Echo Klassik Award in Germany. Engagements include Musetta in La Bohème at the Metropolitan Opera and for Miss Cabell’s debut at the Teatro Colon in Buenos Aires as well as Adina in L’Elisir d’Amore and the Countess in Le Nozze di Figaro at the Lyric Opera of Chicago. She also made debuts with the New Orleans Opera as Juliette in Romeo et Juliette and with the Atlanta Opera as Pamina.